Japanese Candlesticks were developed in the 18th century by the legendary rice trader called Homma Munehisa who used these candlesticks to give an overview of opening price, high, low and closing market price over a given period of time.

The candlesticks charts were used by the legendary rice trader to predict future market prices. After dominating the rice market, Munehisa eventually moved to the Tokyo exchanges where he gained a huge fortune using this candlesticks analysis. He is said to have made over 100 consecutive winning trades.

The main disadvantage of bar charts is that they are not visually appealing; therefore most Gold traders don't use these charts.

Candlestick Charts - candlestick charts use the same price data as bar charts (open, high, low, and close price). However, these charts are presented in a much more visually identifiable way which resembles a candle with wicks on both ends.

How to Interpret Japanese Candlesticks Charts

The rectangle part is called the body of the candlestick.

The high and low are described as shadows and plotted as poking lines.
The color is either blue or red 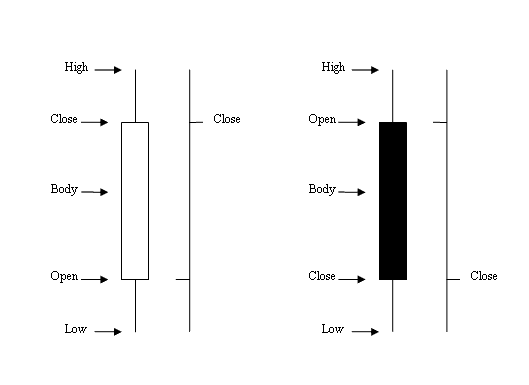 To draw these candlesticks charts on the MetaTrader 4 platform, select the charts drawing tools within the "MetaTrader 4 Toolbar" as shown below.

To view this charts toolbar on MetaTrader 4 go to "View" Next to file at the top left corner of the MetaTrader 4 Platform, Click "View", Then Click "Toolbars", Then check the "Charts" Button. The above toolbar will appear.