How To Trade Gold

When it comes to trading gold online a trader can either buy or sell gold contracts so as to make profits.

When the gold prices are moving up, then traders will buy gold. This is also referred to as going long. Going long is another name for buying. 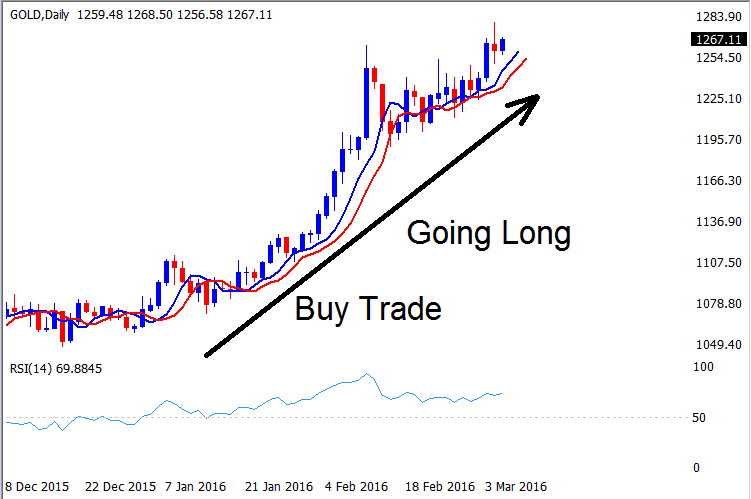 In the trade above when the prices of gold are moving up, a trader will open a buy trade as shown above. This is known as going long - a trader will hold this buy trade as long as prices continue moving in this upwards direction.

When the gold prices are moving down, then traders will sell gold. This is also referred to as going short. Going short is another name for selling. 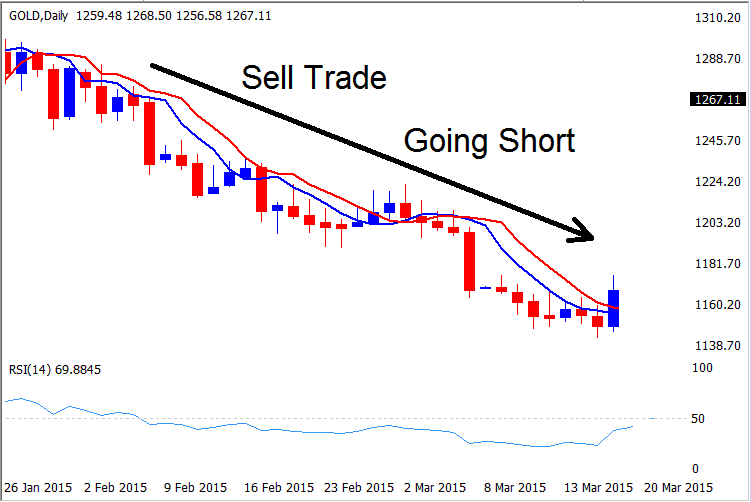 Now that as trader you know when to buy and when to sell gold, the question is how to sell or where to place the buy or sell trade.
To do this a trader will use the gold charts provided. A gold chart will represent the movement of gold prices and draw this using a graphical format that can be used by technical traders to analyze the gold price movement. 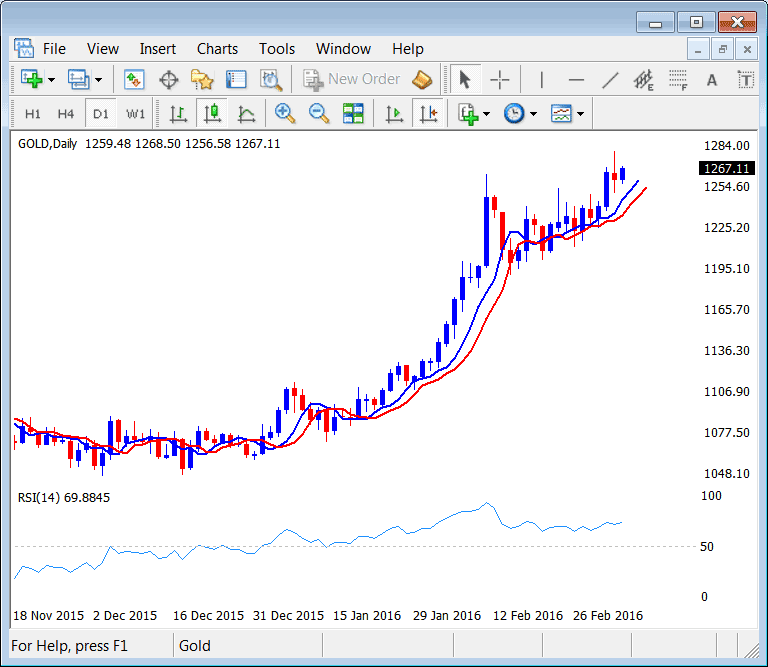 The above gold chart which is the daily trading chart shows the upward movement of gold prices from $1048 per ounce to $1267 per ounce from November 2015 to February 2016.

The price is shown by the vertical axis that has price markings and the date is shown by the horizontal axis that has date and time markings.
The price of Gold and its movement is represented in the form of a chart. The chart shows an upward movement of price. Traders who are trading gold will analyze this price movement to know which market direction to trade. In the chart example above because prices are moving upwards a trader would buy the gold and go long.

A trader can open a buy or a sell trade directly from this chart. By right clicking anywhere on the chart a menu will appear and the trader can choose the open new order option and open a trade.

When trading gold profit is calculated from the price movement - the difference between where a trader opens a trade and where they close the trade will be used to calculate the profit.

This means that is a trader had bought 1 lot of gold at $1060 per ounce and closed the trade at $1260 per ounce, where the price difference would be $200 dollars. Then 200 dollars difference multiplied by $100 profit per $1 move, then this would mean the trader would have made $20,000 in profit from this trade.

To buy one lot of gold which is equal to 100 ounces- at the price of $1050 per ounce a trader would need to have capital of $105,000 ($1050 price per ounce multiplied by 100 ounces). Because not very many retail investors can afford that amount of money - gold trading brokers provide leverage, which means traders can trade using borrowed capital. With the default leverage of 100:1 it means that traders can borrow 100 times their capital which means to open a one lot of gold traders will only need to deposit $1050 dollars in their account and they can now open one lot of gold - the $1050 multiplied by 100 times which is the leverage of 100:1 is equal to $105,000 -“ which is the amount of capital that a trader will control after using leverage.

The trading platform can be downloaded from the gold broker's website and traders can learn how to use this platform using a practice demo account.

Demo practice account is a practice account that traders use to learn about the trading platform and how to open and close trades without the need to of investing their own money. The money used on this account is virtual and traders can practice with the virtual funds until they learn enough about gold trading. Once traders gain enough knowledge and experience to help them make profits then the traders can then decide to open a real gold trading account and start trading gold online.