When these continuation chart patterns are formed on the chart they confirm that the current Gold price trend is going to continue moving in the same direction.

There are four types of continuation chart patterns:

The ascending triangle chart pattern is formed in an uptrend and it shows that the upward direction of the market is going to continue.
It shows that there is a resistance level that the buyers keep pushing each time moving it higher, and once it breaks price will continue moving upward.

The overhead resistance temporarily prevents the Gold market from advancing higher, while the rising trend line beneath the pattern signals that buyers are still present. An upside penetration of the upper trend line is a technical buy signal for a market breaking out from an ascending triangle.
This continuation chart pattern is found within a Gold prices upward trend, the ascending triangle forms as a consolidation period within the uptrend and indicates upside continuation will follow. 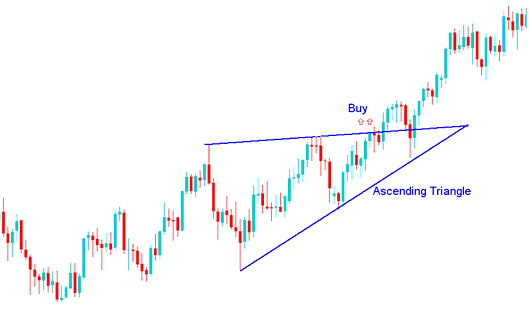 The market formed an ascending triangle during its upward trend which led to an upside continuation. The buy point is when price clears the upper sloping line and the market continues moving upwards.

The descending triangle pattern is formed in a downtrend and it shows that the downward direction of price movement is going to continue.
It shows that there is a support level that the sellers keep pushing each time moving it lower, and once this support level breaks price will continue moving downwards.

The support level temporarily prevents the market from declining, while the descending sloping line above the pattern signals that sellers are still present. A downside penetration of the lower line is a technical sell signal for a market breaking downwards from a descending triangle chart pattern an indication that selling will follow.

Found within a Gold price downtrend, the descending triangle forms as a consolidation period within the downtrend and indicates downside continuation will follow. 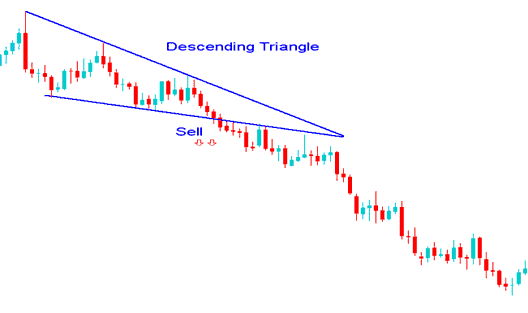 The market formed a descending triangle during its downtrend which led to further selling and a continuation of the downward trend. The technical sell signal is when price breaks the lower horizontal sloping line as selling resumes to push the market lower.

This continuation chart pattern forms what looks like a rectangle. The rectangle is formed by two parallel lines that act as support and resistance for the price until the price breaks out. In general, the flag will not be perfectly flat but it will be sloping.

The bull flag is found within a Gold price upward trend. In this continuation chart pattern the market retraces slightly and this pattern can be considered as a slight retracement with narrow price action that has a slight downward tilt. The technical buy point is when price penetrates the upper line of the flag. The flag portion has highs and lows which can be connected by small lines which are parallel, giving it the look of a small channel.

The pennant chart pattern occurs at halfway point of a bullish upward trend and after a breakout a similar move equal to the height of the flagpole is expected. 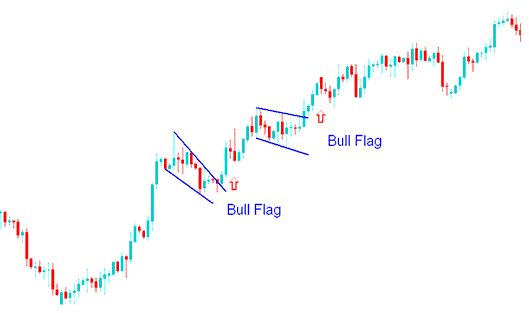 The bull pennant continuation chart pattern above was just a resting period as the market gathered strength to break out and move higher. The continuation signal was confirmed when the upper line was broken to the upside.

This bear flag is found in a Gold price downward trend. The bear flag is a continuation chart pattern where the price retraces slightly with a narrow price action that has a slight upward tilt. The technical sell point is when price penetrates the lower line of the inverted flag. The pennant portion has highs and lows which can be connected by small lines which are parallel, giving it the look of a small channel. 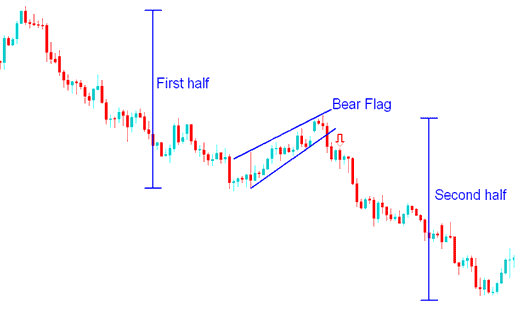 The bear flag pennant chart pattern above was just a resting period for the market prior to more selling. The continuation signal was confirmed when the lower line was broken to the downside.