The question is what happens when these levels are broken and prices move past these levels?

The answer is that when these levels are broken they then change from one to the other - what this means is that:

These concepts are explained using the examples below:

In the example below the support level was tested 2 times and this level could not hold the third time it was tested and sellers were able to push the prices of Gold past this level.

When it comes to trading Gold, when a support level is taken out, the stop loss orders placed below that level are also taken out thus reducing the overall momentum that the previous buyers had. This gives an opportunity to sellers to short Gold and then place their stop loss orders just above this level that has now turned into a resistance level.

As long as this resistance level holds and prices don't move above this new resistance level then the market sentiment is bearish and the market prices are likely to continue moving downwards. All in all the traders who will have opened sell trades will place their stop loss orders a few pips above this level. 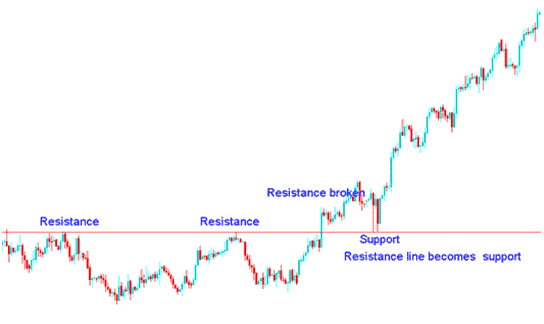 Another reason why the prices of Gold did not move down again is because the sellers who had opened their short trades all their stop loss orders that were placed above this resistance levels were hit therefore reducing the momentum of the sellers.

A series of minor resistance/support levels whose general direction is upwards will be formed.